I had another strange encounter. While I recognize the theme of this dream, this subject is not something that I would normally think about. The reason is, I am mostly a sceptic by nature, and wouldn’t consider this to have any specific meaning. I know this may sound contradictive, as I’m still taking part here on this blog. I will just leave this little dream story here for you, and you can interpret it as you want.

Me and someone else (the setting suggests it may be dreamwalker444) were in a snowy landscape, it was calm and quiet, and very open. It felt like somewhere far away, like the far end of Russia. We were next to a gully that formed a natural barrier along one side of the area. We had somehow been captured by lizard men in military uniforms. They looked like humans except for the head which had a “brutal” appearance. Some of the lizard men present turned out to be prisoners as well. The capturers had decided to arrange a combat tournament to have the prisoners fight. It was unclear what the purpose of this was (if any) apart from some fun for the spectators.

Suddenly a lizard man dressed in a fur coat with the fur turned inwards, showed up. He had a personal style and individuality over him that the others didn’t have. He seemed to have a bit of an “amused” facial expression, but only superficially, as if he had put it on to tease someone. It now became clear to me that all emotions felt by the group, was somehow shared collectively, as if they were all connected spiritually. Me and the other human felt this too. When the new lizard man appeared, there was the general feeling of someone who comes to “crash the party”, and the newcomer knew that this was the case. That was the reason for his timidly smug expression, he looked like a bully finding a target, and the entire group felt this. They were all in a state of hopeless, whiny despair, even if they didn’t say anything.

The newcomer with the coat walked up to a lizard man who seemed like a leader, and said loudly, “I’ll show you, half breed! Give me that!” The leader turned over his battle axe. This was the only actual weapon the entire group possessed. The leader was flinching miserable. Someone in the group said: “You know the rule of the tribals is the law here. He’s a full breed.”

The newcomer resolutely took the axe from the leader, and with one swing cut off his head, as if it was an everyday thing. Then he turned to the group. It was now a collective feeling that we had been captured by this lone lizard man. The others titled him “Mr. Count” and they all felt a deep respect and awe for him. But it was at the same time something that they didn’t want, and they were all miserable, as if a great disaster had struck them and ruined their fun. Mr. Count was very well aware of this and had the attitude of someone who is going to take full advantage of his position.

He walked up to me and the other human and then told a lizard man standing next to us: “We need to set some boundaries”. He then had them draw a line in the snow, and we had to step on the inside of the line. This line was now no easier to cross than a high fence with electric barbed wire. It was as if the connection between the lizard men made them slaves to the general emotion of the group, and despite them hating it, they were not going to fight Mr. Count, because of his pure heritage. It was impossible, and that made his words more powerful than any physical fence.

Mr. Count now shared cigarettes with me, the other human, and a lizard man who was considered having better heritage than the rest of the group. In reality he didn’t have that, but Mr. Count had decided so, so everyone had to treat him this way. The whole point of this was to exert power over the group and to put them down, because Mr. Count knew that they had to think in the same way as him. So he had intentionally picked a weaker individual to be second in command, just to make the rest of the group feel powerless. This indeed made the group feel even more miserable and whiny, and Mr. Count thought this was amusing. In an acted way, of course. He had this attitude, that he only did this because he could, in reality he didn’t care at all. He was just taking a morning walk and stumbled upon something mildly amusing that he could play with for a while, and everyone knew it.

I asked Mr. Count what was going to happen, and he replied in a friendly manner: “We are going to set you free, you will get a lot of fresh air”. It wasn’t clear if he was serious or sarcastic. His mental images sent out said something about putting the lot of the lizard men in a camp and using them as slaves. But the feeling when he said this was very friendly, and I felt as if the double meaning had been placed there just to mess with everyone.

I then woke up, and the feeling of calm friendliness remained with me. I had for the past few days felt frustrated and angry over nothing in particular, but after this dream that negative feeling was gone.

I made this sketch as a reply to dreamwalker444. Then I realized it is really more significant than just that discussion going on in the comment section. I will make this post here so more people can see this. Feel free to share this with anyone.

I used the simplest means possible so that it will be easy to get a quick understanding of what I’m trying to describe with this image. Most of you will already have an understanding of the dimensions and what this means (the context) so I will just give a more articulated comment on the top section, labeled “Logical map”.

There are actually some basic things here that modern science got completely right. But so far they failed to make the right connections. Remember where you first read this, science will be able to confirm these claims later on. 😉

This post may be referred to as a theory developed during meditation and observation.

The following message was presented to me in the form of a three dimensional, schematic image. It was adapted to my way of thinking in such a way as to effectively transmit the message’s full meaning to me. The image would not make sense to someone else if I were to make a drawing. I am here making an attempt at re-telling it in my own words, as a classical argument in the style of Plato.

I see a lot of you, who refer to yourselves as awakened, are looking to the sky. You are longing for a saviour,  a deus ex machina, who will rid you of all debt. The truth that I am going to tell you will upset some of you.

But, let me also tell you, that this is thinking from within the box. You want to install a new, fair, financial system. Let me tell you that such a thing will never happen. Noone is going to land from the sky to give you this. If you want to have a financial system, this current one is good enough.

Already, some of you will feel provoked by my words. Why is that? I am challenging your way of thinking. Let me tell you why I am doing this. The problem does not lie within the construction or function of the current system. The very existence of a financial system is the origin of injustice. Replacing one system with another, that is what thinking inside the box, means. From fear of freedom, you want to replace a tyrant you are tired of, with a new one. In a few generations you will once again be tired of this new tyrant and will want to replace him again. This is the reason why noone will help you with this task.

If you want a financial system, the one you have now is good enough.

Please step outside of the box.

The production of perceived value is all of what you are focusing on. If more people have more money, the value of that money will be less. You already know this as “inflation”. If there is no injustice, there is no value.

The real value is what is materially produced.

The value of a house,  is a place to rest. Will you be more relaxed, if the market value of the house is higher? This is all false value created by your concepts.

The only way to reach “fairness” is to abandon the thinking from within this box.

10 years ago, I had a dream which I made into a painting.

The situation described by this image is complex. A soldier armed with an automatic rifle, is standing idle as a man with a wooden club is charging toward him. Why does he not open fire, this is a threat to him? Why is the man with the club so daring?

I now found this image in the newspaper. 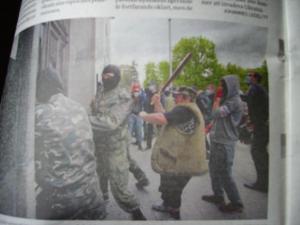 This photo shows pro-russians storming a governmental building in Luhansk. The situation as well as the actual image has a striking similarity.

The “Newton’s cradle” desktop toy demonstrates how this is done. A force will travel through matter with no visible movement on the surface, then it will explode in the other end.

Anything in the world can be made to do the same thing. Electrons moving in an electric cable are rather slow – they travel maybe one meter per second. Yet when the power is turned on in the power plant, electric current is received many miles away. It’s the force that travels through electrons, not the electrons themselves that move all that distance.

There’s also the “snowball effect”, push a small snowball downhill, and it will grow bigger and bigger.

Imagine yourself standing at the top of that hill. You are the butterfly whose flapping of the wings will start the storm in distant lands. Your single thought can make a snowball start rolling downhill. One thought, made of physical matter, can create a force that will travel silently through any kind of matter, and the effect can grow endlessly powerful.

In a game of pool, one ball is used to deliver force and create the desired effect in the surrounding balls. You just have to aim carefully.

Most people are unaware. They do not know that they already have the ability to change anything.