Crystal elementals descend from above.

Magic points are noted by all Gaia beings.

Portentions are released, as collectives embrace.

The world’s most enthusiastic golf fans may just be, well, aliens.

New video footage of a PGA tournament in Ponte Vedra Beach, Florida, has observers asking: Did a UFO appear in the sky during the May 9 event?

One golf fan viewed the tournament on television and “noticed a weird object in the sky,” according to the Mutual UFO Network, or MUFON.

“When you see the pictures, people may think ‘oh, that’s a blimp,’ but after seeing the blimp in other clips, I can easily conclude it’s not the blimp,” the viewer said.

“I also looked for other aircrafts flying by and nothing seemed plausible. The object did have a reflective surface. In the picture, you’ll see a golf ball, a bird, and the flash reflection, while the other object is the unknown craft. You can also notice the object appears to be at a very high altitude for… Lights in the Dark

The surface of Venus is definitely no easy place to which to send a spacecraft. Crushing atmospheric pressures, powerful high-altitude winds amid caustic clouds of sulfuric acid, and temperatures that can soar above 880ºF (475ºC) make the next planet in a no-man’s-land for robotic spacecraft. But those challenges didn’t stop the Soviet space program from successfully putting several craft onto Venus’ surface in the 70s and early 80s, giving us our first views of its kiln-dried landscape.

Venera-3 became the fist spacecraft on the surface of another planet when it impacted Venus on March 1, 1966, but no data was returned. The next year Venera-4 was sent to Venus but was likely crushed by its atmosphere. Venera-7 became the first spacecraft to successfully soft-land on Venus on Dec. 15, 1970, sending back temperature data. Venera-8 landed on… 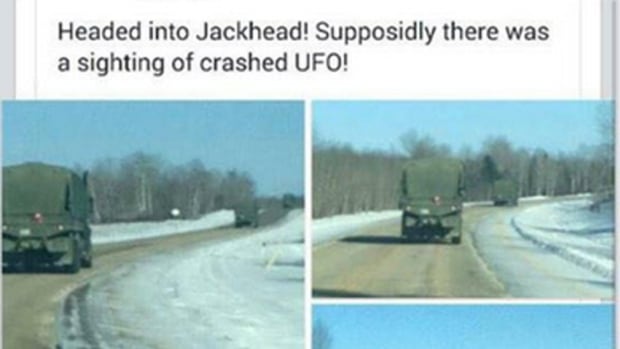 Social media reports of a possible UFO sighting last night near Jackhead, Man., are not true, says the Canadian Forces, which attributed the bright light people saw to an airplane from a training exercise.

On Wednesday night, several people said on Twitter and Facebook that they saw a bright light in the sky, fuelling speculation that it may have been an unidentified flying object.

The rumour became stronger when photos were posted of Canadian Forces vehicles in the area, with some people claiming the military was there to contain a UFO crash site.

But it was not a UFO at all, says Lt.-Col. Paul Davies, commanding officer 38 Territorial Battalion Group, which is involved in an Arctic Response Company Group training exercise on Lake Winnipeg this week. 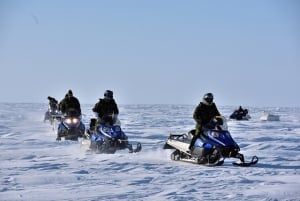 “There’s no aliens, just my…

Lights in the Dark

You may be looking at the faces of future Martians.

The video above, released Feb. 15, shows the results of the latest round of selections for the MarsOne mission: to establish living conditions on Mars and, eventually, send 24 individuals who will become the first permanent human residents on another planet.

(Note: being selected for MarsOne does not include a return ticket.)

Now this, dear readers, is something very special.

Over the weekend the ROSETTA probe did a close fly-by of comet 67P, and today was the day scheduled to see the release of some of the amazing images taken by the NAVCAM camera during that fly-by. How close did ROSETTA get to the comet? Well, it raced past at a height/distance of just 6km. So, obviously the images were always going to be detailed and exciting and fascinating. But when they appeared online this afternoon I was totally unprepared for just how spectacular they were…

Before you take a look at my enhanced and processed crops of the images, take a moment to look at the *official* images, which are featured on today’s ROSETTA Blog post. Go on, I’ll wait…

See? Told you they were something special…

In 1998, Standing Elk wrote the Afterward for my first book. The following message was given to Standing Elk from the Sasquatch people, which is precisely the information given to me over the years. I am sharing this because it’s profoundly important more than ever since our Earth Mother is dying of pollution and WWIII is at our doorstep! This message is only as good to the degree of which one applies it to their lives. Blessings! – Kewaunee

Sasquatchitan. I am Chief of Sasquatchi People. You may think we are hairy and have big feet. Really this is not so.

I come to speak to you because soon, our people will come to you again. The reason we had to leave the community of human beings is because of their loss of this innocence, truth, and purity. For our race and the Laws of our race are based upon…

We’re running a little short on funds this month, as people tend to, and every subscription is greatly needed and appreciated.

Among these segments is what I like to call “planetary healing” where I examine topics that have to do with finding enlightenment and healing the world, as well as a “channeled discussion” where I discuss snippets from some of the latest channelings we’re given each week and a “reader’s question” section where I give my perspective on subscribers’ questions.

The newsletter features loads of material I almost never offer publicly, and I’ve received a lot of comments from subscribers who expressed that it either helped them through difficult…

Centering and grounding of Ascended Gaia Energetics occurs at this moment.

Flash points are reached and released in rapid succession astro-points are passed.