What is a Mandala?

A mandala may be the popularly-recognized type of diagram (often a circle) used extensively by Carl Jung, or a particularly powerful type of offering made by Buddhists.

In its most essential aspect, a mandala may be considered a model of the “Universe” or a particularly cosmology. In many Buddhist traditions, it represents a cosmology in which the focal point is Mount Meru. This cosmology becomes the object of offering in “Mandala Offering” prayers.

You may seen images of traditional 37-point Mandala Offerings made frequently by Tibetan-based Buddhists: 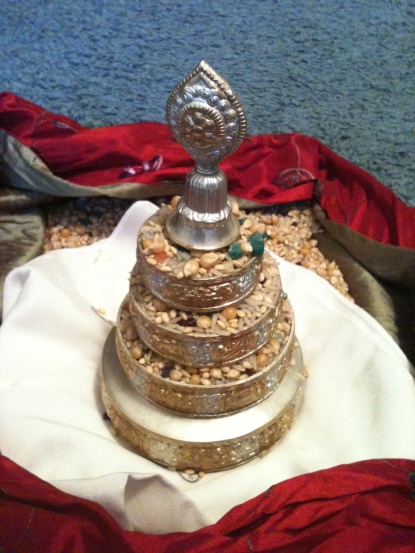 This small version of a 37-point Mandala Offering is the kind often made by Buddhist practitioners.

The post “threads and synchronicities” shares some information about Mandalas, especially as models of the “Universe”, and speaks to aspects of this long version of the prayer.

The Mandala Offering depicts components of the Tibetan Buddhist cosmology, as illustrated here, from the Berzin Archive (this image uses Tibetan terminology; Sanskrit may also be used.): 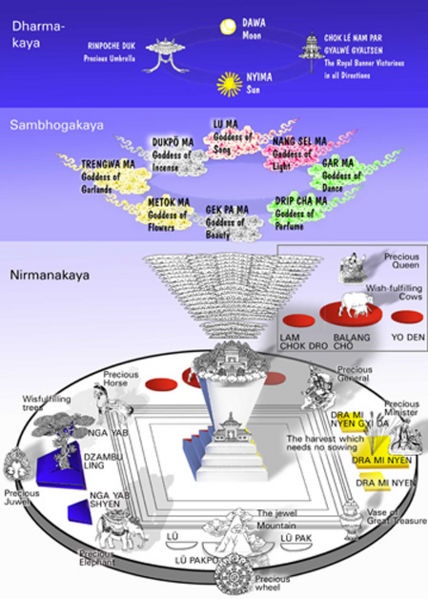 Some consider an actual Mount Meru to exist, both esoterically/mythologically, and “really”.

The Ski Mountaineer website offers this map of Mount Meru in Tanzania, near Kenya and Kilimanjaro:

map of "Mount Meru" from skimountaineer.com

This Mount Meru is a dormant volcano. It connects geologically to earth’s core.

This photo of Mount Meru from Christof Buser (the buser.mobi gallery) shows the mouth of the volcano, which most recently erupted in 1910. 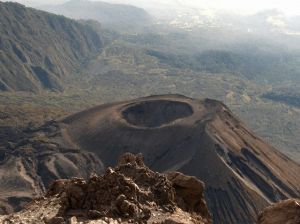 Note the similarities between the Buddhist offering, the physical Mount Meru in Africa, the pyramids at Giza, the Mayan pyramid at Chichen Itza, and the Mount Meru depicted in Buddhist Thangkas and diagrams (see above and below): 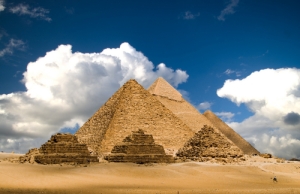 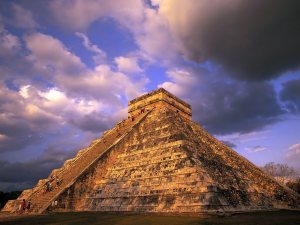 Mount Meru diagram from sharemyattitude.blogspot.com, which includes the heavens above and the hells below.

And then there is Wu Tai Shan, in Shanxi Province, China, considered a deity as well as a pilgrimage destination. Myths abound, such as described in this article by Martin Gray, and is considered the abode of Manjushri, Vajrayana Bodhisattva of Wisdom, as referenced in Wikipedia. I hope Martin Gray will not mind my borrowing the images from his article, shown below… The stairs remind me powerfully of the stair at Chichen Itza. The legends hold that visiting this site may bestow super-natural abilities and longevity. It is also said that Bodhisattvas retire there rather than passing away, and that if one wanders the area, one may hope to meet an emanation of a Buddha or Bodhisattva.

The area is geologically quite permeable, and experienced a tremendous earthquake in 1556. Geothermic anomalies and volcanic evidence in the area’s geology suggest connections to deep subterranean and Cahdehan regions.

The approach to the temple at Wu Tai Shan, Shanxi Province, China, from Martin Gray's article.

According to Teo’Na, these areas all have connection to the crew of Tulya.

Simplified versions of the long mandala offering abound; you may find one example here, at part 6, Keeping a Karma Maintenance Plan.

Also, there’s a brief prayer you may say while making this mudra, and visualizing a perfect world, completely purified of all evil and delusions (version by Venerable Geshe Kelsang Gyatso):

“The ground sprinkled with perfume and spread with flowers, The Great Mountain (Meru), Four Lands (four directions/continents), Sun and Moon, Seen as a Buddha-land and offered thus, May all beings enjoy such Pure Lands.

With the hand mudra shown below, one may loop a mala/prayer beads around the “mountain”… 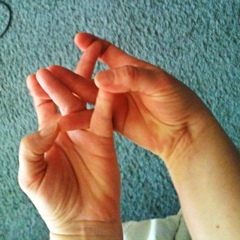 The images below are personal interpretations of the concept of “Mandala” as a model of the universe, as well as a Pure Land to be imagined in order to be manifested, as well as a protected ground.

The “protected ground” of a mandala is an essential part of the Vajrayana Buddhist practice of generating oneself as an Enlightened Being. This practice, often referred to as “placing the result in the path”, serves as a “test run”, familiarizing oneself with the surroundings and minds of Enlightenment, in preparation for the actual realization of one’s Full Enlightenment.

(all original artwork by Leslee Hare) 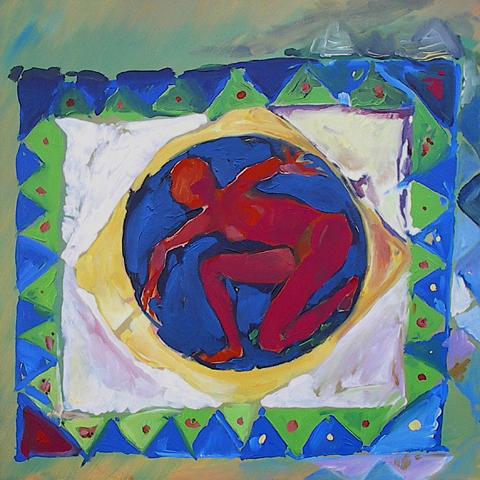 "lady of red" - an early recollection of worlds known in other lifetimes (leslee hare, 1985) 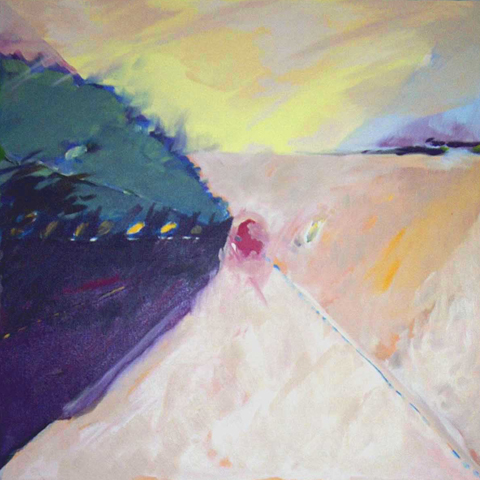 "la robe nacre'e" (the pearlescent dress) - a dream of being on the precipice of the next lesson, leaving the forest to cross the desert (leslee hare, 1985)

THE COMPONENTS AND PURPOSES OF MANDALAS

The Charnel Grounds are the outermost region of a Mandala/World. They appear completely ordinary and degenerate, deluded and nightmarish, perverse and frightening.

They illustrate wrathful beings and actions.

(Question from DreamWalker:
“Leslee, I have a question that might be worth asking here. A few times you’ve mentioned the concept of “wrath”. I have to admit this term now has me confused. I thought I understood it, but now that I understand more about the role of “ego”, “wrath” no longer makes any sense for a quality of a higher-dimensional being to have. Yet there are mandalas full of wrath-ful monstrous beings. The dictionary meaning is of course no help.

Would you be able to provide a short explanation of this term, or perhaps an example that would help me understand this concept better?

I “feel” it is similar to how alcohol, money, and violence means different things in dreams than they do in 3-D. In dreams this is our brains providing a poor translation of a “higher level” concept.

Thank you in advance!”)

(Leslee’s reply:)
Here is a short-version reply that might help: PURE (meaning “enlightened”) wrathful actions NEVER include anger. Pure wrath is used lovingly as a last-ditch effort to stop someone from ignorantly causing great harm to themselves or others.
For instance, if you were to push your son into a mud puddle to quickly get him out of striking range if a snake, that would be wrathful.
If you were to push him just because you wanted to see him cry, well that’s just mean.
The trick I that really only Enlightened Beings have the wisdom to know when a wrathful action us appropriate.

For a human being to declare a war is inexcusable.

God picked on Job for years and years… For what purpose? I’ll leave it for everyone to reach their own conclusions… 😉