(Note: This sub-page is a work in progress, we hope to add to it as we learn more. You also may notice a little repetition among these pages, when more than one subject shares similar information.)

(Note from Leslee: If you read the main page “Beneath The Surface”, you’ll find some information that was gathered a few months ago, from various sources. I was receiving images during meditations, and at that time I was connecting primarily with Teo’Na. This was an outgrowth of what I had been receiving through Ghost Radar, and was  – and still is – part of an evolving process of understanding how Gaia is far more complex and beautiful than what has been described to date.)

There’s much to share with you all about Inner Gaia, and you may find some of it quite surprising – but you’ve already been told you’re in for some surprises!

First, let’s take another look at this sketch: 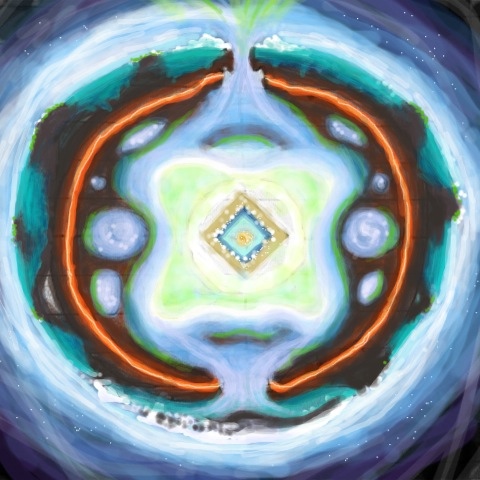 Cut-Away View of Gaia, showing (from outside-in) Her Atmospheric Layers, the Outer Surface Crust, the Mantle, the Inner Crust, the Inner Atmosphere, and, in the Center, the Mothership GLS OcaTAwa, with GLS Tulya inside. Note the openings at the North and South Poles (with floating island South Pole Cap), and the Aurora Borealis issuing from the polar openings. Within the Inner and Outer Crusts, the Cavities (shown in Sky Blue) are the areas We call the Interstitial Regions. There are also floating islands between OcaTAwa and the Polar Openings.

Telos is one of many cities in Inner Earth that your Star Families interact with.  These cities, as well as certain human cities on the Outer Surface of Gaia, were also seeded by us. Telos is one of the older cities; some of the newer ones were formed as recently as last year.

Athabantos is the most recently established city, and it is located on the Inner Crust, more or less beneath Pagosa, Springs, Colorado. Mark Kimmel knows Athabantos as “Abi-Qor”, and Leslee has been visiting Athabantos each time she sleeps, since May 16, 2012 (this was the day that Leslee connected with Adrial through Mark). We’re asking her to post any missing dreams here, so that you may read them.