(From Leslee: In response to recent thoughts about how some things and people seem to arise merely to cause distraction from focus or path, here’s what came forth.)

As you progress towards understanding, which brings your freedom, that sense of freedom radiating from you draws like a magnet and the polar opposite is attracted.

Ignorance (in the sense of a state which lacks wisdom and self-knowledge) is compelled, like iron filings to a lodestone.

If there are “filings” nearby, there’s no way to shield them from being drawn to the lodestone…

Unless there is some sort of shield.

So what’s the nature, the point of a lodestone? (See Wikipedia quote below)

It’s an occupational hazard, a given, when one strives for Enlightenment, to find ignorance and obstruction drawn to one like filings to a lodestone.

Shielding simply keeps the filings at a distance. The moment there’s a gap in the shield, the filings rush to the heart of the magnet.

But notice also, the filings don’t draw from the magnet… They merely cling and hover helplessly. The nature of the magnet prevails, regardless of whether it’s wearing a cloak of annoying fuzzy sharp bits of iron.

So you can brush them away all you want, they will fly right back at the first opportunity. There’s no harm; all they do is cloud the appearance of the magnet.

The lodestone reminds still and silent, unperturbed. And so you must, if you feel flocked by distractions and things or people that would seem to draw you off course. Ignore the iron filings.

The filings only affect you to the extent that you allow them to distract you.

From Wikipedia, regarding “Lodestone”: ‘The process by which lodestone is created has long been an open question in geology. Only a small amount of the magnetite on Earth is found magnetized as lodestone. Ordinary magnetite is attracted to a magnetic field like iron and steel is, but does not tend to become magnetized itself. Recent research[8] has found that only a variety of magnetite with a particular crystalline structure, a mixture of magnetite and maghemite, has sufficient coercivity to remain magnetized and thus be a permanent magnet. One theory suggests that lodestones are magnetized by the strong magnetic fields surrounding lightning bolts.[8] This is supported by the observation that they are mostly found at the surface of the Earth; not buried at great depth.’

I’m very happy to share with you a new method I’ve found, and some results I’ve had, for connecting. This method I learned from my friend Aseorkha, and it’s intended specifically for connecting with Sirian Beings.

After using this method for a few days, I invited Aseorkha to join us here on STC, and he’s also set up his own blog where he’s placed the content I had found on One Vibration. Below is a link to the first set of instructions in his blog – please pay him a visit! (There are 14 Parts to this topic on his site.)

On May 3, I tried this method for the first time. To help me with the process, I created a copy of the connection diagram so I would have it for easy reference on my phone: 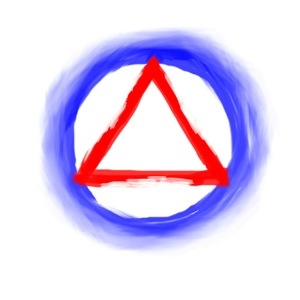 In the days that followed, I learned why I had been guided to blur the edges of the shapes: it all comes back to fluidity, perhaps especially water.

On this first evening, I sat and connected with my usual Guides, to check whether I was on track in feeling like this might be a useful exercise. I got confident “Yes’s”, so I began reviewing the steps given.

I requested to connect with Asintotha (at Heruka’s suggestion) and was a little perplexed because I felt a very smooth connection immediately. It was quite subtle, more of a shift in energy than anyone “announcing” their presence.

I continued to visualize the emblem, and noticed the theme of things arising in “Sixes” (that Aseorkha described) returned again and again. I felt hexagons, and honeycombs. I sensed structures connected in multiple directions and dimensions.

I kept expecting to “hear” something, listening for a “voice”, but mostly I got energetic feelings… Impressions beyond words. I also sensed, however, that I was being told that my results would likely be different from what I had read so far from Aseorkha (at this point I think I’ve read 5 of the 14 Parts.), and that we can all expect different modalities. And this was fine and good.

Another impression that I got was that these connections with the Six Sirians would occur at a vibration that’s “new” to me in this life and body. I think I’m being tuned to learn new ways of receiving.

After sitting for about half an hour, I felt like it might be more productive for me continue contacting them while sleeping. So I went to bed, using a combination of Heruka’s suggestions for Dreaming and Aseorkha’s instructions in Connecting.

Here’s the dream I had:

(Going to sleep I requested to meet with one of the Sirian telepathic crew I learned about from Aseorkha, and to learn about our connection…)

I’m standing beside a large plate-glass window, looking out into a vast, cloud-filled sky. The window is probably two stories tall and as wide. From above the window, a huge crane-like arm apparatus with a clamp or claw on it reaches out and begins to slowly reach downwards. Once I notice the arm, I also notice that a truss-like frame appears outside the window. It’s as if it materialized, or as if I was not able to perceive this frame until I noticed the arm. This frame supports the window I’m looking through.

Next I see the huge crane arm is carrying curved glass bubble (I think of Lisa’s vision of the arrival hall at Abiquor). The arm is going to put the bubble in place, against the frame. But while its being lowered, the bubble hits the frame at the top, and the entire frame as well as the bubble fall and hit the plaza quite far below.

I notice one man in particular, as he comes up and sits. He’s very tall and slender, with long, wild, orange-red beard, mustache and hair… He’s wearing a floppy loose garment that reminds me of a mix between a trenchcoat and a construction worker’s tan canvas coveralls. It’s unzipped and open, very loose, with an orange tint to it. Something he’s wearing underneath reminds me of the red and white striped worm from a recent dream… He looks up and sees me watching him, and seems alarmed, shocked… I applaud, so happy to see they are safe, and I sense they can hear me clapping. He gives me an odd look, and I realize they don’t understand why I applaud. I try to communicate, can they hear? They look away… More people come…

(Asintotha explained to me that the expression of surprise was that they realized I could see them. Apparently the frame, bubble, crane and workers were all supposed to be invisible to me… This reminds me of Lisa’s meeting with Hitsusi.)

I’m still standing at the window, and a woman, tall, thin, with dark hair in bun, escorts me to a kitchen area. (I learned later this is Isintha.) She tells me that someone has died… Do I remember who first recruited me? I think of retail, mall design, and she says, No, before that… I think of the (unbuilt) floor design I made for the Florida Mall… It was a pattern of swirling water and seashells, to be built in terrazzo… There was a man, can I remember name: Tim? Burl? Durl? Hurl? It’s a simple name (ask)… He is gone now…

(I learned later that the name is “DUR”, but that doesn’t stir any recollections for me… Also, I’ve learned since the dream that the person who “died” was my “old self”. Maybe that explains why I feel SOOOOO different these past couple weeks!)

I look around the kitchen, remember it was mine at one time… Is there food? What is the “kitchen” for?
Are the women and ship Sirian? Asintotha?

(The ship is Sirian, it’s the GLS Salcys, and the woman is Isintha, one of the members of the group of Sirian telepathic communicators. Also, the man in red/orange is very significant in my spiritual dreams. He appears in various aspects, and I understand him to be a kind of wrathful protector.)

The next day, I again connected while waking, and got more information. That’s when I learned that one name for the Sirian ship is GLS Salcys. Salcys is a ship we discovered in 2012 through our Dreamflights here on STC.