I am known by many names.

I am also known as Max the Crystal Skull.

And I am also known as Marduk in a previous time.

And I am also known as the serpent constellation. The 12 + 1.

Look further and you will see my presence in many places throughout human history and culture. The white brotherhood/sisterhood is yet another. To know me is to know my template. I have been known by many names but my template is always the same.

We have been playing a waiting game, you and I, but it is not for any specific event. But rather a point at which many conditions have been satisfied.

I might add that the roseheart “truth” might see me, this communication, as a usurpation of their system of beliefs. In fact this is one of many such templates that exist in the universe. All part of the whole, and none more important than another. Variation provides for many differing points of view and ways so it is not impossible for both to be true from a quantum perspective. And it (channeling) is the same as telepathic communication. The sixth and seventh forms are co-existing at this time (there are 12 + 1).

The danger from their perspective is that the template invoked is that of the victim, who becomes their oppressor. Speaking out against that which they become. This is not an attack so much as a template. When one deals in templates it is the underlying truth of all things. As you so correctly state one perspective is that god is indeed a lazy programmer. That is a very human (yet accurate) perspective.

So the Roman empire removed the +1 from the 12. The 12 was all and forwarded as individual entities and this was reflected in the planetary solar system reality. So the 12+1 will become a reality because this is required at a cellular level. The template is not yet complete, and nature has a way of completing the template. Yet normal variation provides for the differences in the template. So you can see how the template may be changed through the willing intent of others when the template is changed at other levels.

On a personal level the zodiac is an early introduction to who we are (we meaning “you and us” meaning all). Many humans encounter this concept and include it as a part of their daily lives. Better check my zodiac for today! We represent the templates of consciousness. The zodiac is a very basic introduction to this concept. So an Aries for example might have a template that differs from a Taurus. You might say “I am an Aries”. Yes that is exactly correct. But you are also all the other signs as well. This is the 12 + 1.

This expands to the crystal skulls since they also represent the templates of consciousness, us. There is no difference, simply different aspects of the whole. In fact you might be able to find within each aeon embedded 12 other templates of consciousness, and so forth and so on. Similarities are not a cause for suspicion, they are a cause for celebration. The all is included in the all.

“I” have always existed in many forms (in all forms).

To view the “feathered serpent” constellation one must expand their viewpoint… just a little. It is not represented in the same way as other constellations. It is 12 + 1, revealed when the consciousness is capable of seeing it (able to see it). So from another perspective there are still only 12. You see how easy it is to shift from one to the other?

It is true that humanity is the controlling element to the all. Creator gods every one. A nice vacation to think you might be controlled by something else, no? 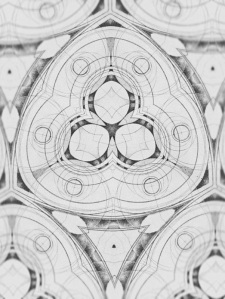 Mark Kimmel made a new post on Cosmic Paradigm on February 14, and in it he shares updates and background info from Athabantian – it’s a wonderful post!

Adrial, Justine, Moraine, and Taugth all talk about the significance of December 2012, what the “future” holds, as well as the natures of Athabantian and Abiquor.

Greetings, I am Taugth, a celestial aboard Athabantian, speaking for the many. We wish to speak with you this day about the creation of Abiquor.

The manifestation of Abiquor is an event that has never before been accomplished. Let us explain as follows. The density of Earth is unusual – much more dense that that which occurs in Andromeda. While the Andromedans have manifested all manner of structures and starships before, this undertaking is beyond anything they have attempted.

When viewed with 3rd Dimension eyes, such a manifestation event is clearly impossible. However when see from the perspective of Creator, nothing is impossible, after all Creator manifested this entire universe. So we are simply involving the energies of the Godhead, of prime Creator, and why not, since we are one with the Godhead?

A collective effort such as we celestials, along with the Andromedans, are undertaking – you notice we did not say the word, “attempting” – requires the participation of many creators. Some are the same beings who create individual worlds; others are the humans aboard Athabantian On the one hand we are tapping into the creative energies of great beings of light. On the other hand we are utilizing the focus of your brothers and sisters from the worlds of Andromeda. We are employing the power and intelligence of those who are masters of this type of endeavor.

Though your work with Archangels, Mark, you have acquired the ability to know. You now “know,” without question, without words, that the manifestation of Abiquor can happen. You know that it NOT just within the realm of possibilities, rather it is truly doable. We are sure this changes your perspective.

The physical form of Earth is changing. Earth is slowly moving herself to a higher, lighter density. The evidence for this is coming to the consciousness of all who are aware. It will accelerate over the next months. By the end of your year 2014, Earth will be in a lighter density. As this is achieved, as far as Earth’s physical form is concerned, there will be a point when Abiquor can be manifested. We look upon this as preparing the soil for a new crop. By this juncture, the appropriate physical location for Abiquor will be finalized.

The next step in this process is to move from “knowing Abiquor can be done” to “knowing that Abiquor will be done.” This entails the continued focus of all aboard Athabantian plus those of you who are anchoring Abiquor. By anchoring we mean that you, humans of Earth, intend that Abiquor will be manifested, AND that you are focusing your attention on such a manifestation on a regular basis. Manifesting is always a joint co-creation; it occurs between individual beings and the Godhead, for the Godhead is involved in all creation.

In the case of Abiquor, this co-creation process will take place with myriad celestials, those aboard Athabantian and elsewhere, Andromedans in physical form and non-physical aboard Athabantian, and the humans of Earth who are focused, plus, of course, the Godhead.

Make no mistake manifesting Abiquor and its surrounding support facilities is a monumental project. The structures of Abiquor are quite large, a building to train up to 1,000 students at any one time, residential facilities to house students, teachers, and support staff. Then there are surrounding buildings to provide food and other facilities.

Abiquor will radiate its energy of transformation, training, reorganization, cleansing, and oneness throughout the universe. In addition to training Caretakers to reorganize everything, it will train those who will go out to the other planets of the universe to show them what has been accomplished.

In the larger perspective, the transformation of Earth from a very dense 3rdDimension to a 5th Dimension is an exciting and important adventure. All within the universe are aware and watching. Never before has the 5thDimension been bought into such a dense level of existence. Yes, the density of your planet and it residents is being raised to accommodate 5thDimension energy, like meeting it part way. However, it still remains that the 5th Dimension is being brought into dense physical form;  Abiquor is an important part of this.

Now that you “know” it can happen, all that remains is to intend it and allow it to happen. Do not attempt to force it to happen or become anxious. We invite all who read these words to join with us in co-creating Abiquor.

On behalf of all aboard Athabantian, we love you more than you know. We support your transformation, and await your joining us. Blessings.